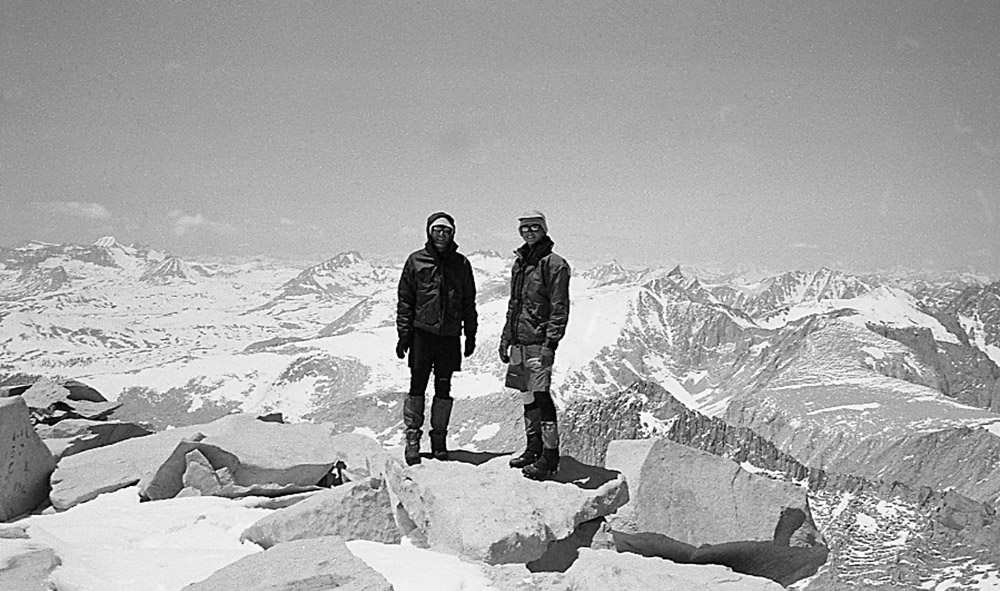 Note: This series of “Twice As Old” blog posts recounts Dylan’s experience on the PCT in 1996 at the age of 23 and again in 2019 at 47. Pete is writing (and designing and printing and binding) two books that he’s hoping to have done in Summer 2020. Together these stories, along with other posts on this site, and Pete’s zine MAN MADE, congregate into a dispersed narrative that documents two friends as they journey from youth into middle age.

This is the second chapter in a series exploring a Pacific Crest Trail hike that began on April 16, 1996 and didn’t end until my partner Peter Miles Bergman and I had doubled in age and fulfilled a 23-year-old pact, completing a TAOist thruhike.

In the first chapter I looked at how the planning of such a trip has drastically changed over the years. Next, before I get onto the trail, I’m going to take us on the road. Nearly every trail hike starts with a road trip to a trailhead, but in August of 2019 ours included a hunt for a buried relic from 1996. This strange detour takes us into some of the psychological terrain unique to our story.

Doing a long distance backpack trip was more in character for me than Pete, then and now, so I often reflect on the fact that hiking the PCT was his idea. If I was the geographical navigator, Pete was the conceptual navigator. I followed his lead when it came to ideas, sometimes adding a twist of my own, which Pete would happily embellish and weave into the plan. I always enjoyed the weird places we ended up.

Our hike began at the end of Pete’s undergraduate art education. I didn’t know much about his experience in school, but I was aware that it put a wild spin on his sense of identity. I caught a kind of contact high from it, and felt like Pete’s ideas could add depth and edginess to our trip.

I can only account for these ideas as they intersected my experience, so let me describe my role in one of them. I would carry a single-use panoramic camera. Every day we would pick a good vista point for a carefully composed photo. I would choose the backdrop, and Pete would pace off a set distance from me and strike a pose in a sequence he had planned out. I would snap a photo of him positioned in the same spot at the right side of the frame. About two months into our hike Pete would be skipping his graduation ceremony. On that day he would hike in his graduation cap and gown, which would feature in the flipbook photo. Every day after that he would be a wearing a business suit, which would slowly be transformed into filthy hiker garb by the vagaries of trail life. There might be nothing at all left of it by the time we reached Canada.

Symbolic costumes were already part of our identities. We didn’t attend high school together, but we would see each other during summer break and compare stories of outrageous outfits worn to school. Pete still loves to refer to my last day of high school, when I showed up clad only in thick layers of Saran wrap. When called to the office I pulled a pair of jeans and a T-shirt from my locker, and was dismissed as a false alarm when the principal saw me. As I left I heard the secretary exclaim behind me, “but he’s crinkling Mr. Jahns!”

When we graduated from high school this youthful rebelliousness graduated also to the world of ideas. Our friend Captain Bill, proprietor of Chaos Manor where we convened to explore cognitive realms untouched by our public schools, bestowed on Pete a copy of Carl Jung’s Man and His Symbols. This led eventually to an awareness of our society’s lack of sanctioned rites of passage, and the possibility that we could design our own.

I think we had some faint inkling, destined to be ignored in our fervor, that planning your own rite of passage is somewhat akin to playing a practical joke on yourself. The only way for it to succeed is if the plan goes completely off the rails.

Fortunately for us our plan was based on the tacit assumption that we were and would remain in complete control of our situation on the trail. We would have the physical, mental, and financial capacity to hike the entire trail in five months and conduct our rite of passage in the off-hours. If anything we worried that we’d failed to provide ourselves an adequate challenge, and it would all be too easy.

Of course the real transformation came from the destruction of these assumptions. Various forms of starvation, physical failures, nightmares, losses, and poor photography conditions tempered our expectations, but it wasn’t until we hit Tuolumne Meadows after two months of hiking that the plan was decisively broken. With Pete’s graduation day almost upon us, the primary symbols of the operation were lost. The package containing his cap and gown, and his singular business suit, did not arrive with our resupply package. Nor did it come the next day. It was a dead letter.

I was disappointed by this, but Pete was devastated. The plan was an exciting project for me. For him, his adult identity as an artist may have been at stake. He hadn’t talked a lot about his education, but he had mentioned the performance artist Tehching Hsieh, admiring the years of super-disciplined planning and execution involved in his work. Now Pete was beginning his career in abject failure after just two months. I don’t think I’ll ever fully know what he went through, but it was excruciating to witness.

Tehching Hsieh on one of his five one year performance pieces.

Pete was unhappy, but agreed to keep hiking. After a couple of treacherous, ice-cold stream crossings and some grueling climbs he seemed to bounce back.

A couple of weeks later hip pain began to hobble me, just as we needed to pick up the pace to finish in time for me to move to Chicago and start school at DePaul University. I began each day limping, barely able to move. I had also been ignoring my bank account, which was nearly empty only halfway through the hike. The pain increased and funds decreased inexorably until I too was broken, and forced to face the fact that I could not finish the hike.

My rite was completed in the convenience-store town of Old Station, when I confessed my situation to Pete and let go of our plan to hike the entire PCT. “I guess we are not going to be able to tell this trip what it means to us,” I said to Pete in the angst of newfound wisdom. Again we considered ending the hike right there and then, and decided against it. We chose the Oregon border as our endpoint. With some time to slow down and rest I figured I could make it that far. The pressure release from this decision was the greatest relief I had ever felt.

With both of us laid low and humbled, admitting defeat, we found a package at our next resupply. Pete’s cap and gown, and his business suit had appeared in a strange twist of fate. Despite all of our setbacks, we had been taking flipbook pictures every day. Perhaps his project could still be salvaged. He made a new plan.

On July 17, two days before my 24th birthday, we reached the Oregon border. Pete was wearing his suit. The next day we signed our pact: we would hike the rest of the Pacific Crest Trail together when we were twice as old, in the far-off year of 2018. Or 2019 – math was not our strongest trail lesson.

Pete wasn’t done with his plans, though. A month later he returned to Oregon with his friend Chris Sharon, the trail-worn business suit, a shovel, and an ammo can. Going from memory, he tried to return to the spot north of the California/Oregon border where we stopped hiking and hitched a ride into Ashland. When he reached the spot he climbed the nearest hill, dug a hole, buried the ammo can with the suit inside, and marked the spot with a small rock cairn.

It would take a long time to make the flipbook, but Pete did it. Eventually he made a digital version as well.

Twenty-three years later, on Sunday August 18 2019, we woke up at Jackson Gap, just north of the California/Oregon border. The dirt road seemed a lot longer and rougher than we remembered. Once again we put our plans and expectations on the balance with reality, and started up the nearest hill with a shovel. Here’s some audio from that moment.

This time we know: when the time is right, reality will follow suit.