Twice As Old: The Plan 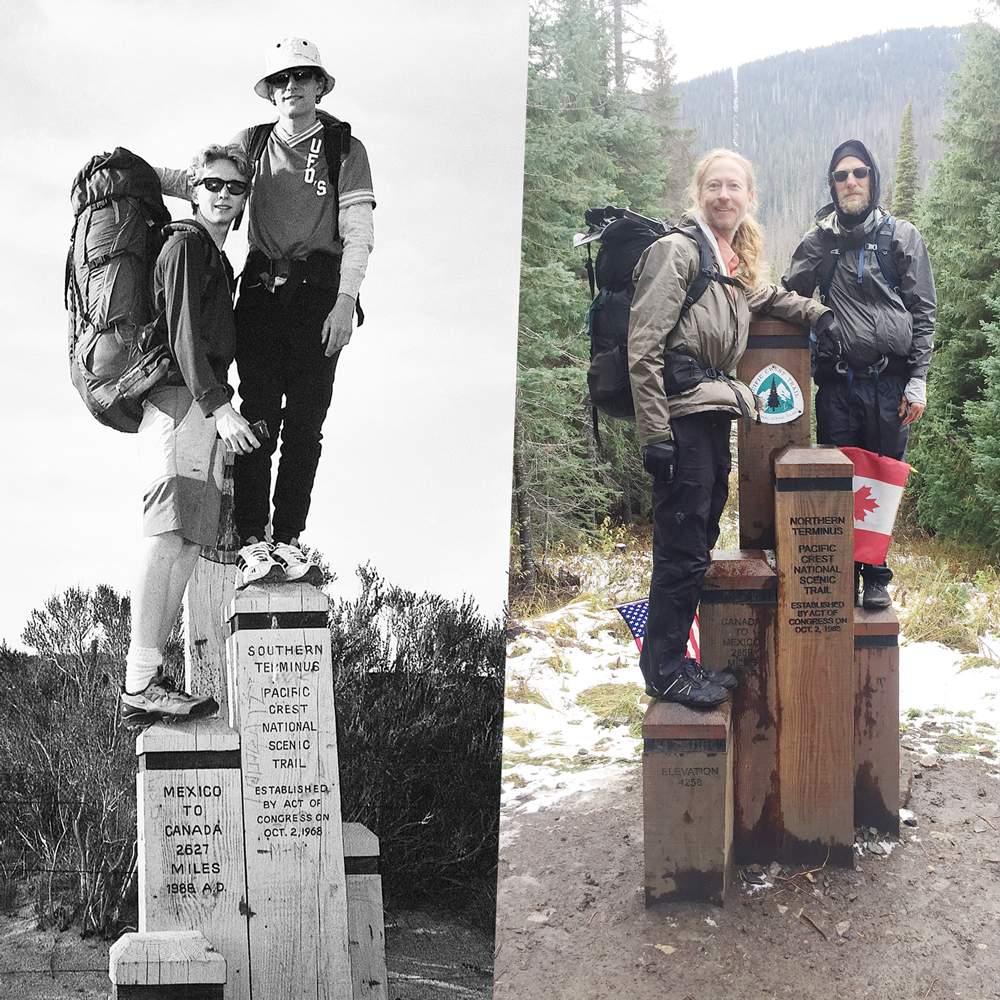 Note: This series of “Twice As Old” blog posts recounts Dylan’s experience on the PCT in 1996 at the age of 23 and again in 2019 at 47. Pete is writing (and designing and printing and binding) two books that he’s hoping to have done in Summer 2020. Together these stories, along with other posts on this site, and Pete’s zine MAN MADE, congregate into a dispersed narrative that documents two friends as they journey from youth into middle age.

This is the first of a series exploring a Pacific Crest Trail hike that began on April 16, 1996 and didn’t end until my partner and I had doubled in age and fulfilled a 23-year-old pact, completing a TAOist thruhike.

Anyone who has tried to hike the Pacific Crest Trail, or any long trail, will tell you that the experience begins long before you heft a pack onto your back and start walking. The preparations required to live outdoors for months on end are monumental. The choices made during this pre-hike period can make success possible, or in many more cases impossible.

I’m Dylan Kuhn, and when I was 23 years old I planned a PCT thruhike with my friend Peter Bergman. Pete had never been on an overnight backpack trip, so I provided the voice of experience, having gone on multi-day pack trips with my dad in the Rocky mountains of Wyoming, Colorado, and even in the Sierras of California. I felt certain that I could extend this experience to limitless glory on a four month, 2650-mile PCT trek.

My overarching goal in this series is to convey a sense of how things have changed in the 23 years between the beginning and end of our hike. To do this for the planning phase, I don’t think you need to know much about how a thruhike is planned in 2019. If I describe our planning process in 1996, you’ll sense the differences. I found them amusing and sometimes surprising.

On my previous hikes I had learned to navigate, cook, camp, and hike distances over ten miles, but I never had to resupply. It wasn’t obvious how to approach this. I enjoyed telling people we were setting off to hike thousands of miles. Nearly always they would ask, “How will you carry enough food to hike that far?”

Pete had sent me a copy of The High Adventure of Eric Ryback: Canada to Mexico on Foot, which mentions post offices, convenience stores, and vending machines among Eric’s food sources on his 1970 hike. This was a clue, but I needed more specific information.

At this time I lived in the tiny old Spanish enclave of Chimayo, New Mexico and Pete lived in San Diego. I was in one of my more unusual living situations. My girlfriend and I rented a wood-heated hexagonal silo made of two-by-fours stacked up like bricks. It had a phone line, and that phone line was plugged into a 56k modem which connected in turn to my Power Mac. In just a dozen minutes I could lock up that line running Netscape on the World Wide Web. Mom wondered why she kept getting a busy signal when she called. It was because I was indeed busy clicking around a revolutionary tree of human-curated hyperlinks known as Yahoo! It took a lot of clicks, because the tree was very deep and could not be searched except by clicking through one branch after another, and each new page took some time to load.

It turned out that Yahoo! did not contain the information I sought, but it did have a number of links to another web directory site called Great Outdoor Recreation Pages, or GORP.com. More clicking through that maze of hyperlinks eventually brought me to a page for the Pacific Crest Trail Association. Not too deep into that site was one single page dedicated to long-distance hike planning. That page told us which books (the paper kind) we should order. It had a phone number to call for credit card orders, but I think I probably mailed a check.

As Pete and I each read through our own copy of Ray Jardine’s PCT Hiker’s Handbook we exchanged email. I used an email account supplied by my employer using Los Alamos National Laboratory servers, and Pete had a University of California San Diego address. Our messages were quite long, containing quotes, recipes, and gear descriptions, but not a single link. They were written as letters. We could have sent the same letters via the US Postal Service without losing anything but some delivery time. This may have been the last time I corresponded with a friend in this style.

With a few ideas in mind from emails, I hopped in my F-150 Econoline three-on-the-tree van to go gear shopping. I drove an hour to the outdoor store in Santa Fe. I wish I could remember the name. I spent hours there touching things, trying them on, simulating how I would use them. I probably made only two shopping trips, and one more in San Diego, so each one felt urgent and significant. They were tactile and imaginative experiences. The stores and the people who worked there were witness to my public declaration that I was going to attempt something truly awesome.

Our girlfriends didn’t seem to grasp the awesomeness. Pete said his (analog) girlfriend Siri was unsatisfied with the amount of quality time left for her after his 20 to 30 hours of training walks, 30 hours of work, 15 hours of school, and a few hundred squats. My girlfriend Camella was a good sport about finding a cheaper place to live by herself while I hiked, but she might have been a little miffed that my PCT preparations seemed more important than helping her move to a smaller apartment in Los Alamos. It was clear to Pete and I that great adventures called for some sacrifice. We hoped Camella and Siri would understand this without us having to say it, and they would naturally find sustenance in long-distance relationships with the rare breed of elite long-distance backpackers.

Pete’s mom, on the other hand, recognized the scale of our ambitions and enthusiastically signed up as our support crew. Annette Bergman would dedicate a room of her home to our resupply packages, mail them on schedule with extra treats added, drop emergency supplies along the trail for us, and bring us home mid-hike, filthy and ravenous, for a few zero-mile days. She lived in Ridgecrest, California, now famous for earthquakes and better known as a PCT resupply town than it was then. We drove there in Pete’s giant pink convertible to drop off our boxes and make final arrangements before one of Pete’s friends drove us to the trail from San Diego.

In August 2019 Pete and I stood in my apartment in Reno, Nevada, almost ready for another departure. Here’s a bit of our conversation recorded on my micro-cassette recorder.

Do we sound a little less convinced of our awesomeness this time around? Maybe that’s part of the reason our spouses were on board with us this time. My wife Ann would store, schlep, and mail resupply boxes. She would drive us to our starting point near the the California / Oregon border. Pete’s wife Heather had a hand in most of his preparations, including a certain talisman that will come into play later. Both planned to be there at the end of the trail in Manning Park, British Columbia when we finished. Two months of separation would not be easy on our marriages, but they were strong and supportive at the get go this time. Stronger, perhaps, than our bodies and minds would prove to be.